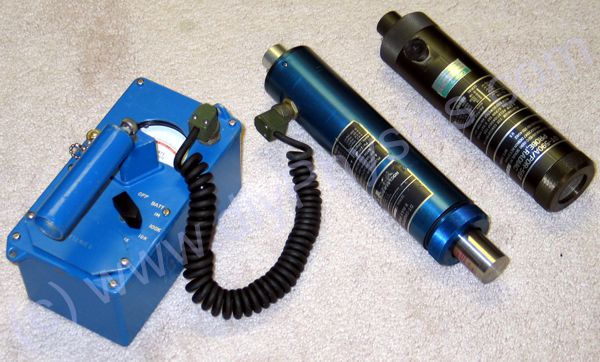 The military Radiac Set, AN/PDR-56 is a portable scintillation type instrument used for detection of alpha contamination. The system includes a large and small interchangeable probe with a probe extension.  This system is being phased out by the US Air Force, so new probes are becoming widely available in the surplus market.

The “x-ray” probe for the AN/PDR-56 uses a CaF2(Eu) scintillator/photomultiplier combination to detect the 14-21 keV gammas from Pu-239. The x-ray probe is an assembly which includes the amplifier-discriminator circuits integral to the phototube scintillator housing. The discriminator is a single channel analyzer adjusted to detect Pu-239 gamma rays. END_OF_DOCUMENT_TOKEN_TO_BE_REPLACED 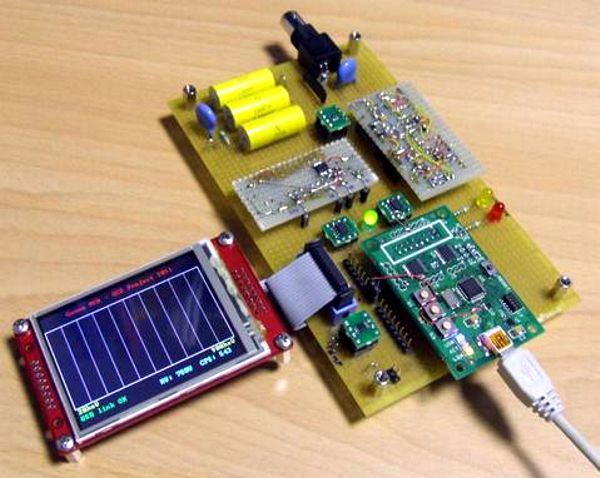 An amateur-use open-source gamma spectrum analyzer is being developed by members of the GeigerCounterEnthusiast (GCE) Yahoo Group.  This multichannel analyzer (MCA) is based on the STM32F103VBT6 microcontroller.  It displays spectra on a color LCD.

To access the design files (and hopefully to participate in the development) you will need to join the GammaSpectrometry Yahoo Group (free membership).  Join through: http://groups.yahoo.com/ END_OF_DOCUMENT_TOKEN_TO_BE_REPLACED 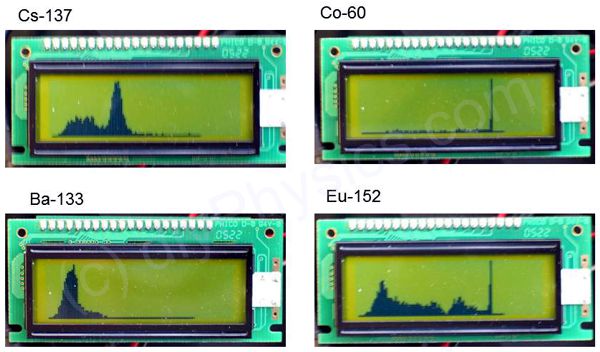 Some time ago I was developing a medical instrument which required histogramming, which got me in the mood to retake my own PIC MCA project(http://home.comcast.net/~prutchi/index_files/scint.htm ).   I used the variable RAM in the microcontroller (16F877), so I limited the number of channels to 95 and let the histogram run until some channel reaches 240 counts (the highest 8-bit number that yields an integer when divided by 8 which is also divisible by the 30 pixel height of the LCD). The firmware then displays the spectrum as a bar with a maximum height of 30 pixels for each one of the 95 channels. END_OF_DOCUMENT_TOKEN_TO_BE_REPLACED 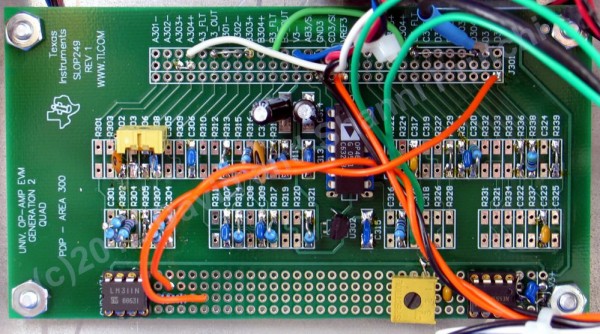 We built the bulk of our PMT amplifier/processor/discriminator on a Universal PDIP Operational Amplifier Evaluation Module by Texas Instruments (model OPAMPEVM-PDIP).  Click on the picture above for a full-size version of the picture.

The diagram in the following pdf file shows the connection layout for the circuit shown in the book’s Figure 34: PMT Processor PCB  END_OF_DOCUMENT_TOKEN_TO_BE_REPLACED 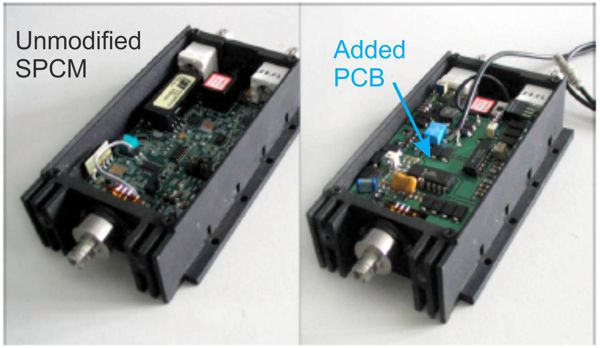 I. Rech, I. Labanca, M. Ghioni, and S. Cova of the Politecnico di Milano in Italy described an interesting modification to the Perkin Elmer SPCM-AQR Single-Photon Counting Module (SPCM) to improve its timing characteristics in: 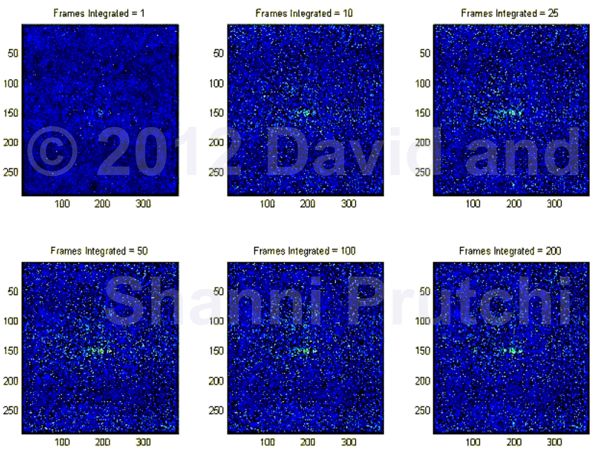 In Chapter 5 of the book we list a short Matlab® program to integrate successive video frames from our diy intensified camera to image double-slit interference patterns obtained by shooting a single photon at a time.

The program listed in the book uses Vision for Matlab (VFM).  However, this utility is not compatible with all versions of Windows and Matlab.  An alternative is VCAPG2 by Kazuyuki Kobayashi available at http://www.ikko.k.hosei.ac.jp/~matlab/matkatuyo/vcapg2.htm  (Also available from our SOFTWARE page). END_OF_DOCUMENT_TOKEN_TO_BE_REPLACED

Figure 144 in the book shows the schematic diagram for our d.i.y. thermoelectrically cooled single-photon avalanche photodiode (SPAD).  Our design calls for a ThermOptics DN1225 TEC controller.  However, this model is not available any more.  Fortunatelly, the ThermOptics’ DN1221 subminiature Bipolar Temperature Controller for Thermoelectric Coolers (TEC) is equally suitable by adapting the pinout and adjusting component values. END_OF_DOCUMENT_TOKEN_TO_BE_REPLACED 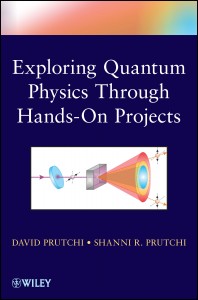 Today we received the first two copies of the book!  Amazon’s website says that it will be shipping on January 29, 2012.

From the back cover:

“Build an intuitive understanding of the principles behind quantum mechanics through practical construction and replication of original experiments.

With easy-to-acquire, low-cost materials and basic knowledge of algebra and trigonometry, Exploring Quantum Physics through Hands-on Projects takes readers step by step through the process of re-creating scientific experiments that played an essential role in the creation and development of quantum mechanics.

Presented in near chronological order—from discoveries of the early twentieth century to new material on entanglement—this book includes question- and experiment-filled chapters on:

From simple measurements of Planck’s constant to testing violations of Bell’s inequalities using entangled photons, Exploring Quantum Physics through Hands-on Projects not only immerses readers in the process of quantum mechanics, it gives them insight into the history of the field—how the theories and discoveries apply to our world not only today . . . but also tomorrow.

By immersing readers in groundbreaking experiments that can be performed at home, school, or in the lab, this first-ever, hands-on book successfully demystifies the world of quantum physics for all who seek to explore it—from science enthusiasts and undergrad physics students to practicing physicists and engineers.” 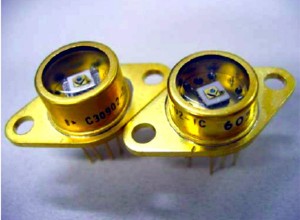 Figure 144 in the book shows the schematic diagram for our d.i.y. passively-quenched SPCM based on a Perkin-Elmer C30902S-DTC SPAD.

In our circuit, the SPAD is reverse-biased through a 200kΩ resistor. This value is sufficiently large that an avalanche in the SPAD will be quenched by itself within less than a nanosecond. The pulses produced by the SPAD are AC-coupled to a fast constant-level discriminator which has an output that is compatible with TTL logic circuits. END_OF_DOCUMENT_TOKEN_TO_BE_REPLACED 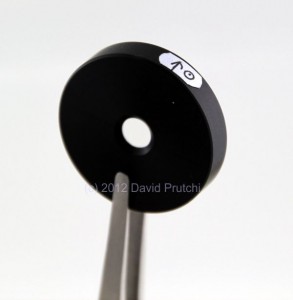 Our diy entangled-photon source, shown in the book’s Figure 142,  uses two BBO crystals that support type I down-conversion that are mounted according to a design by Paul Kwiat and his colleagues at the Los Alamos National Laboratory.

The nonlinear crystal in our photon entangler comprises two 5 mm x 5 mm x 0.1 mm BBO crystals mounted face-to-face at an angle of 90 degrees to each other. As shown in the book’s Figure 140, pump photons polarized at 45 degrees produce two cones of entangled down-converted photons.

END_OF_DOCUMENT_TOKEN_TO_BE_REPLACED 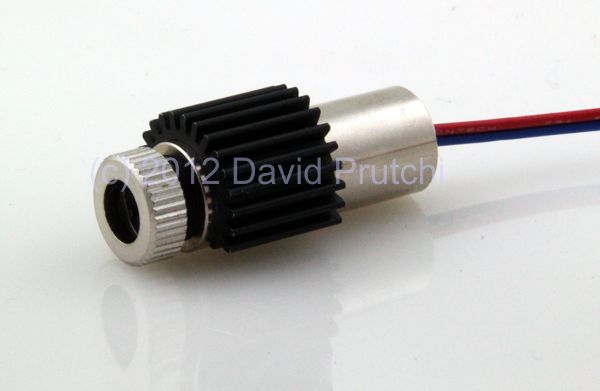 This is the 405 nm pump laser used in the circuit shown in the book’s Figure 141.   The laser is built from a Blu Ray disk burner laser diode.  We drive the laser diode with 160 mA to produce around 100 mW of 405-nm polarized light.  The laser diode is capable of producing 250 mW, but we prefer to drive it much more conservatively. END_OF_DOCUMENT_TOKEN_TO_BE_REPLACED 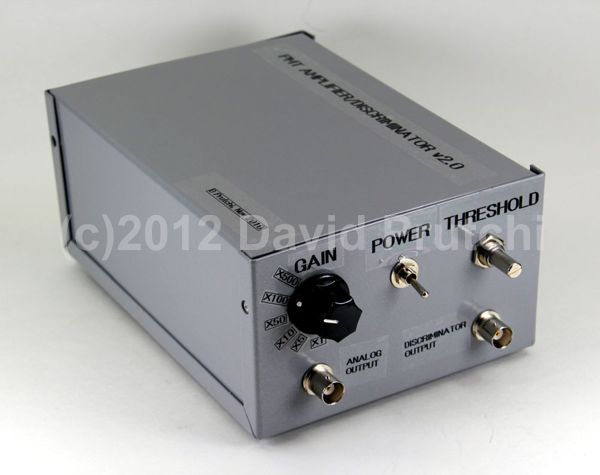 Figure 34 in the book shows the schematic diagram for the photomultiplier tube (PMT) signal processing circuit that amplifies the narrow pulses detected by the PMT probe.  The discriminator stage removes small pulses produced by thermal noise in the tube.  A pulse stretcher outputs pulses that can be heard on a speaker.  In addition, the analog output is suitable for use with a sound-card-based multichannel pulse-height analyzer (MCA). END_OF_DOCUMENT_TOKEN_TO_BE_REPLACED 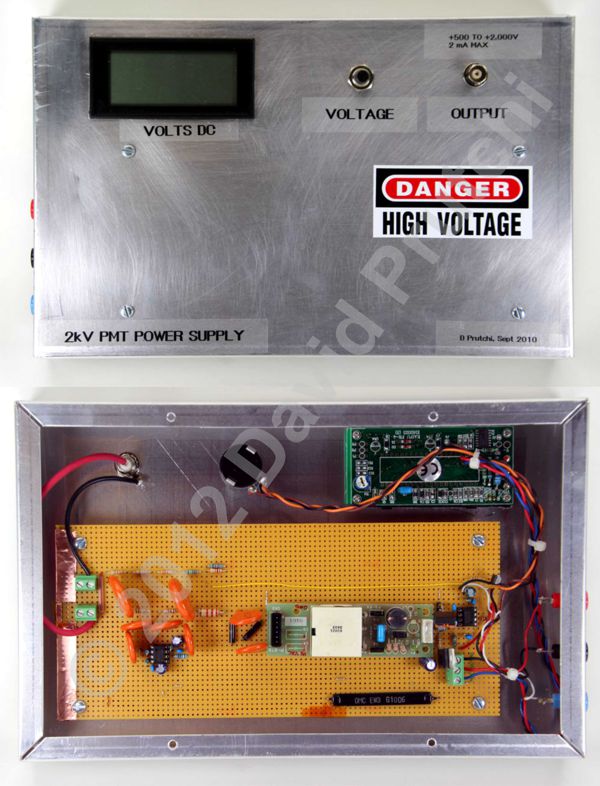 The book’s Figure 32 shows the schematic diagram for a low-cost, variable-voltage PMT power supply based on a BXA-12579 inverter module that is originally designed as a power supply for cold-cathode fluorescent lamps.  This under-$20 module produces 1,500VAC at around 30kHz from a 12VDC input.

We are posting this picture to help you build your own power supply.  It shows the BXA-12579 that has been modified as described in the book.   The op-amp to the right of the CCFL module is used to control the voltage supplied to the module.  The high-voltage AC output of the inverter is rectified and doubled and filtered by the diodes and capacitors at the left of the CCFL module. END_OF_DOCUMENT_TOKEN_TO_BE_REPLACED 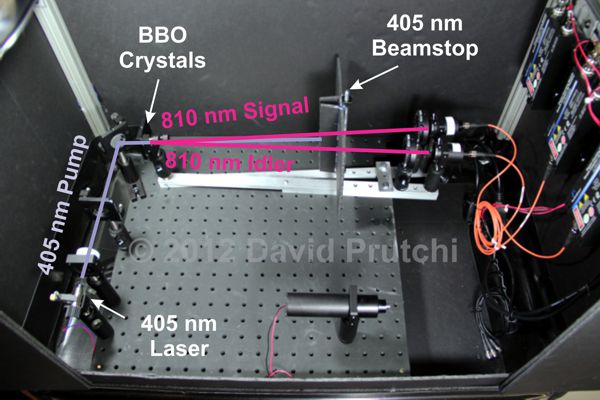 This picture supplements Figure 148 in the book.  The colors should help you visualize the paths of the beams in our entangled-photon source:  Violet – 405 nm pump laser beam; Pink – 810 nm signal and idler entangled-photon beams.  A detailed schematic diagram for the entangler is available in the book’s Figure 147.  Figure 149 shows the 405 nm beamstop. END_OF_DOCUMENT_TOKEN_TO_BE_REPLACED

This is the datasheet for the RCA 6655A PMT used in the probe shown in the book’s Figure 30: RCA_6655A_Datasheet

Schematic diagrams for the probe are in Figure 29.