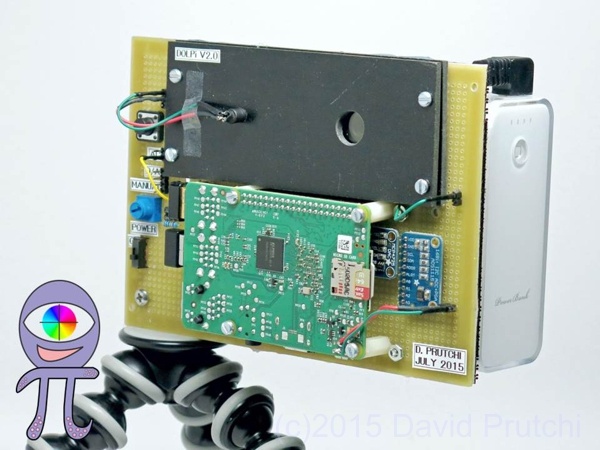 The polarization of light carries interesting information about our visual environment of which we are usually unaware. Some animals have evolved the capability to see polarization as a distinct characteristic of light, and rely critically on this sense for navigation and survival. For example, many fish, amphibians, arthropods, and octopuses use polarization vision as a compass for navigation, to detect water surfaces, to enhance the detection of prey and predators, and probably also as a private means to communicate among each other.

While we have used technology to expand our vision beyond the limits of our ordinary wavelength and intensity sensitivities, the unintuitive nature of polarization has slowed down the development of practical applications for polarization imaging. Polarization cameras do exist, but at over $50,000, they are mostly research curiosities that have found very few practical uses outside the lab.

The DOLPi project aims to widely open the field of polarization imaging by constructing a very low cost polarization camera that can be used to research and develop game-changing applications across a wide range of fields – spanning all the way from environmental monitoring and medical diagnostics, to security and antiterrorism applications.

The DOLPi polarization camera is based on a standard Raspberry Pi 2 single-board computer and its dedicated 5MP camera. What makes the DOLPi unique is that the camera sits behind a software-controlled electro-optic polarization modulator, allowing the capture of images through an electronic polarization analyzer. The modulator itself is hacked from two low-cost auto-darkening welding mask filters ($9 each). In spite of its simplicity, DOLPi produces very high quality polarization images.

This is a first-of-its-kind project! I am not aware of any polarization imager ever presented as an enthusiast-level DIY project, yet it holds truly awesome disruptive power for the development of brand new scientific and commercial applications!

A complete description of this project in pdf format is available at: DOLPi_Polarimetric_Camera_D_Prutchi_2015_v2

At the heart of the DOLPi camera is the Electro-Optic (EO) polarization modulator. This assembly, which consists of a liquid-crystal panel and a linear polarizer film selectively passes light at different polarization angles under software control.

The liquid crystal panel used for the DOLPi camera is harvested from a low-cost auto-darkening welding mask filter. These are similar in construction to an LCD display, where the whole filter is a single gigantic “pixel”. In its intended use, the auto-darkening filter allows the user to see through the filter while setting up the pieces to be welded, but as soon as light sensors detect the welding arc, the filter turns dark to protect the welder’s eyes.

Before being able to use the LCP assembly from the welding filter, it is necessary to remove the back-side polarizer film. It peels off easily after lifting a corner with a sharp hobby knife. The remaining polarizer and LCP now form a voltage-controlled polarization analyzer. Let’s call this assembly a “VCPA” for short. 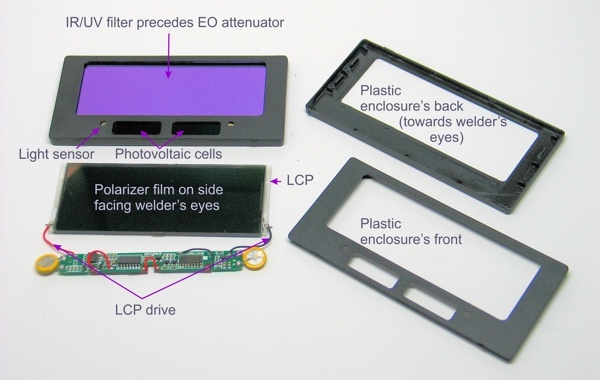 The welding mask’s LCP can be made to rotate polarization to values between its two extremes at 0⁰ and 90⁰. Although it is possible to find a voltage that will set the LCP to rotate light’s polarization by around 45⁰, changes in the liquid crystal take place with time, so the polarization state will shift with complex, interacting time constants that are dependent on temperature, age, and other factors. For this reason, the drive amplitude to achieve 45⁰ rotation of polarization needs to be periodically recalibrated. 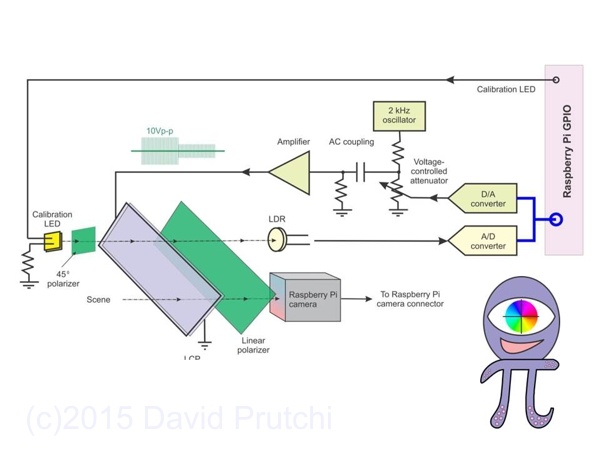 The VCPA in DOLPi is driven with 2 kHz square-wave AC. The signal is generated by a 555-based square wave oscillator and fed to an AC-coupled amplifier through a voltage-controlled resistor implemented from a simple P-type JFET. The amplifier boosts the drive signal to a maximum peak-to-peak amplitude of 10V. The Raspberry Pi controls the amplitude of the drive signal through a MCP4725 digital-to-analog converter.

I built a self-calibrating mechanism for the camera by adding a LED, a 45⁰ polarizer, and a light sensor (a light-dependent resistor – or LDR) on a separate optical path across the VCPA. Before each use, the Raspberry Pi turns on the LED and measures the 45⁰-polarized light transmitted across the VCPA as the drive amplitude is ramped up. An ADS1015 12-bit, 4-channel analog-to-digital converter is used by the Raspberry Pi to generate a transmission plot from which the D/A setting for maximum transmission can be found. The maximum value corresponds to the drive setting to be used to acquire images at an analysis angle of 45⁰. 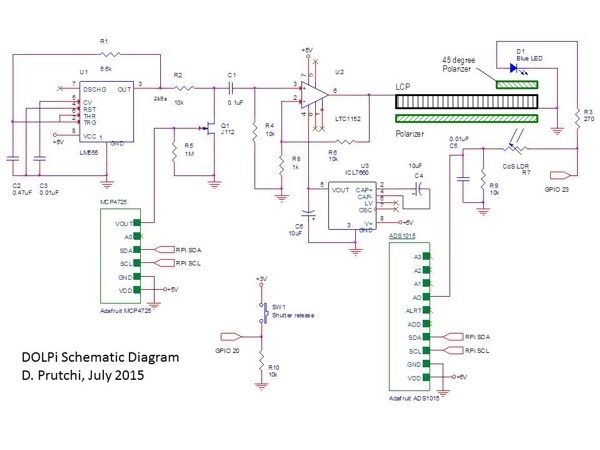 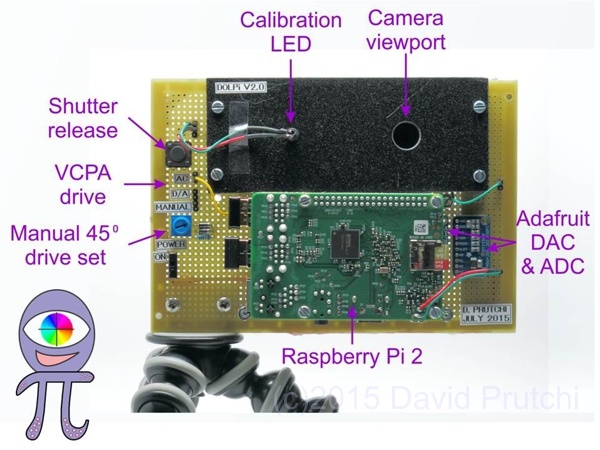 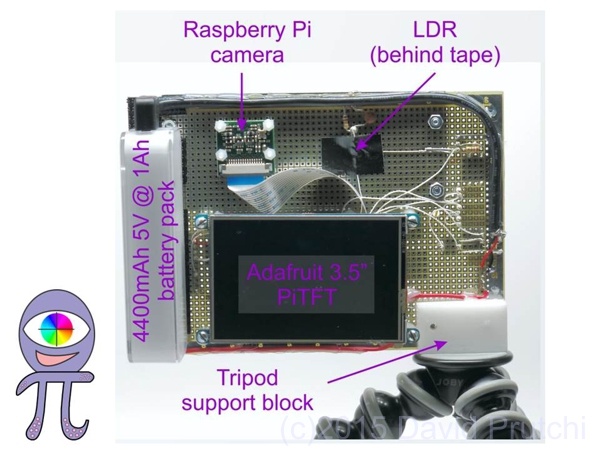 After loading required libraries and initializing the Raspberry Pi’s ports, the device runs the auto-calibration procedure by sweeping through LCP drive amplitudes between 0V and 10Vp-p while measuring the intensity of 45⁰-polarized light going through the VCPA. The DAC setting at maximum transmission is stored for use in taking frames at 45⁰.

The Raspberry camera is then allowed to sample the scene for a few seconds to set its internal auto-exposure and then locking the exposure settings to keep consistency among images. The imaging loop consists of taking three grayscale images with the VCPA set at 0⁰, 45⁰, and 90⁰, and then combining these pictures into a single color image encoding the scene’s intensity and polarization. 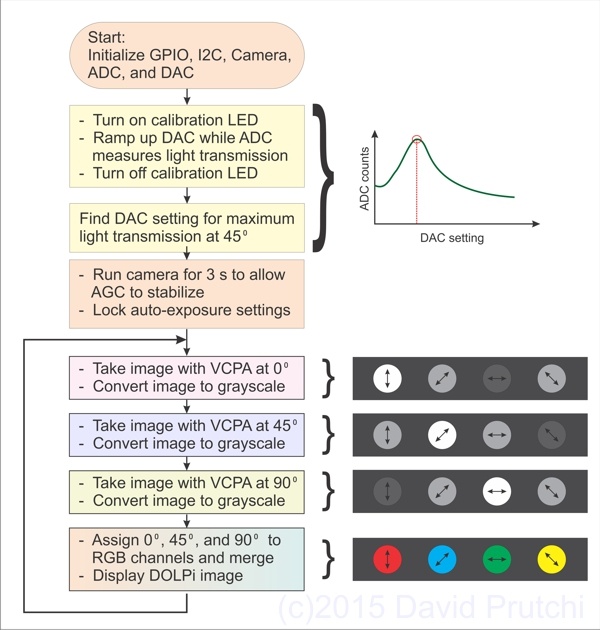 Non-polarized light becomes polarized when it is reflected by a nonmetallic surface. The degree of polarization depends on the angle at which the light hits the surface, as well as on the type of reflective material. Water, snow fields, and asphalt roads reflect the Sun’s light with very strong horizontal polarization (i.e. parallel to the reflective surface).

Many aquatic insects use their polarization-sensitive vision to locate ponds. For example, insects that lay eggs in water find and select egg-laying sites based on the intensity of polarization from reflective water surfaces. Unfortunately, many human-made objects can reflect horizontally polarized light so strongly that they appear to aquatic insects to be bodies of water. Some – like solar panels – reflect light with such high level of horizontal polarization (close to 100%) that they look to aquatic insects as far superior breeding grounds than pond water (which reflects light with a degree of polarization of around 30 to 70%), becoming ecological death traps to these organisms. DOLPi is a useful tool for understanding the way in which organisms with polarization-sensitive vision see the world.

Polarization vectors in the sky are all oriented along parallel circles centered on the Sun’s position. Being able to see the distribution of polarization angles can be used as an orientation cue. In fact, sky polarization patterns are used by many insects for navigation. For example, honeybees use celestial polarization to move between the hive and foraging locations. Salmons are thought to have similar capabilities to orient themselves based on the sky’s polarization as seen underwater.

Man-made objects often reflect light with some degree of polarization when they incorporate non-metallic surfaces such as glass, plastic, paints, and rubbers. Since most natural backgrounds do not polarize light, man-made materials are highlighted by color in DOLPi images. Neither camouflage nor moderate foliage escape DOLPi, making it possible to develop new methods for humanitarian detection and clearance of land mines.

So… What about the Cloaked UFOs?

I have never seen a UFO, and don’t know anyone who claims to have seen one either. In addition, I am not aware of any compelling evidence that we are being visited by extraterrestrial beings, so I remain skeptical. However, it is fun to imagine how massive alien (or military) craft could be made to fly in our skies without being seen. Maybe the craft could be rendered transparent? Maybe it could bend or reflect the light around it so that it is cloaked within a bubble of invisibility? Maybe it could use an active cloaking screen that paints an image of the background on its surface?

We don’t have to go extraterrestrial to find examples of these cloaking methods. Just go into the ocean and you’ll find dozens of species that camouflage themselves through transparency and mirror reflection.   However, these cloaking strategies can be defeated by animals that have evolved polarization-sensitive vision, and the same could possibly work against artificial cloaking devices. As a matter of fact, polarization cues are so important underwater that evolution has given some animals – like cuttlefish – polarization-sensitive instead of color-sensitive vision.

DOLPi will be there to save the day if Wonder Woman ever turns into a supervillain bent on destroying the world with her transparent jet. Barring that scenario, DOLPi will probably serve more as a low-cost foundation for the development of applications based on polarization-sensitive imaging and machine vision. However, the disruptive power of this technology is truly awesome!

As discussed before, biological tissues reflect and scatter light with different polarization characteristics, so polarimetric imaging through DOLPi can be used to develop low-cost, highly accurate methods to screen for skin cancers.

Polarimetric imaging has started to be used for satellite-based characterization of atmospheric aerosol particles. In fact, particle size, chemical composition, and shape can only be measured by including polarization information into a satellite’s imaging capabilities. Unfortunately, satellite observations only show what can be seen from above, and not what hides below layers of clouds and pollution.

DOLPi opens up the field of polarimetric imaging to the citizen scientist, enabling the development of techniques for remote sensing of vast swaths of atmosphere to detect and characterize pollution and volcanic ash, giving the public unfiltered access to information about the nature and sources of hazardous air contaminants.

DOLPi also enables the development of low-cost tools for real-time monitoring of volcanic emissions, providing advanced data to populations at risk, as well as to local airports and air traffic such that appropriate warnings can be issued to those in harm’s way.

Lastly, and with a more strategic view, DOLPi gives researchers and enthusiast scientists the possibility of developing networks of low-cost sensors to measure atmospheric aerosol scattering and absorption properties that at are presently the principal source of uncertainty in climate modeling.

The variety of uses is limited only by the imagination! It is my hope that DOLPi will introduce fellow hackers and engineers to the awesome power of polarimetric imaging and inspire the development of breakthrough applications ranging from environmental monitoring and medical diagnostics, to security and antiterrorism applications.